Survey: The Majority of Americans Believe South Carolina Should Remove the Confederate Flag

CHARLOTTE, NC July 2, 2015 – According to a recent survey by Accelerant Research, nearly two-thirds (60%) of American adults are in favor of South Carolina removing the Confederate Battle Flag from its State House grounds, while approximately one-quarter (27%) of Americans believe the flag should remain.

Opinions about the flag vary sharply across different demographic, political, and (to a lesser extent) geographic subgroups of the U.S. population.  Only two in five (40%) Republicans support the flag’s removal, compared to more than four in five (82%) Democrats.  Nearly nine out of ten (89%) African Americans want the flag removed, compared to 55% of Caucasians and 53% of other ethnicities.  Generationally, 68% of Millennials (18-34) think the flag should be removed, while 62% of Generation Xers (35-49), 58% of Baby Boomers (50-68), and 57% of Traditionalists (69 or older) share the same opinion.

In terms of geography, opinions are not as different as many might expect.  Residents of Southern and Midwestern states are equally less likely to be in favor of the flag’s removal (58%), compared to those in the Northeast and Western states (65%).

When asked, in their own words, to explain why the flag should stay or go in South Carolina, Americans offer strikingly similar language in their arguments.  Words most often used to argue both in support of and in opposition to the flag’s removal are “history,” “racist,” “people,” “symbol,” and “slavery.”  The most notable difference between the two sides of the argument are that those in favor of keeping the flag are far more likely to use the word “heritage” to explain why, while those who want the flag removed are more likely to use the word “hate.” 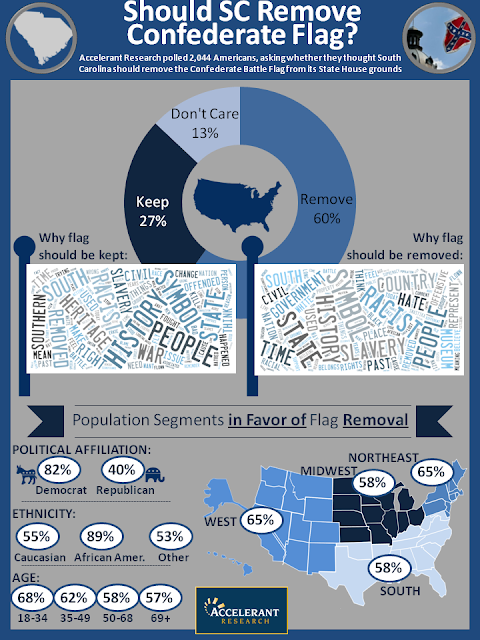