CHARLOTTE, NC June 8, 2010 – In spite of the PR beatings financial services companies, energy companies, and automobile manufacturers have taken in recent months, political advertising is perceived as far less trustworthy than advertising from these or other sources, according to the results of a recent survey conducted by Charlotte-based Accelerant Research. Thirty percent of respondents indicated that political advertisements are ‘totally unbelievable,’ compared to 16% for energy/oil company ads, 14% for credit cards, 11% for investment companies, and 5% for automobile manufacturers. 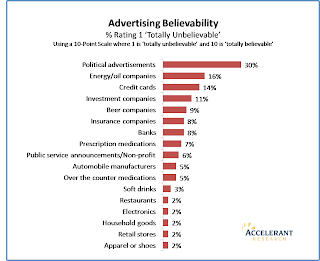 Other key findings of this research included:
Accelerant Research conducted this survey online among a demographically representative sample of 1,830 Americans, age 18 and older. The survey was conducted in June, 2010 and has a margin of error of approximately 2.3 percentage points. 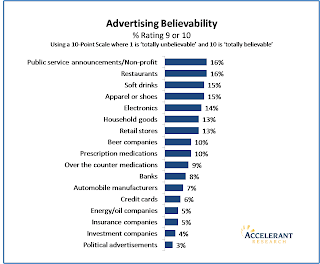 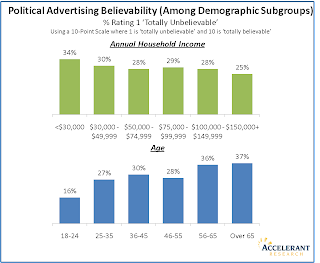