The winning moment of the 2013 Super Bowl ads was the hug between trainer and Clydesdale in Budweiser’s “Brotherhood” spot.  This was by far the most preferred moment of this year’s batch of ads, as no other ad in general or other scene in particular captured the level of appeal of this embrace. 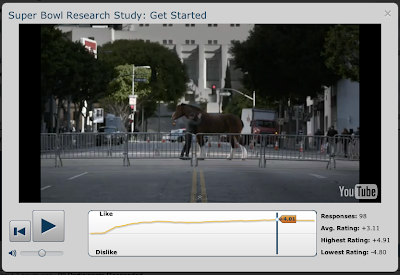 Conversely, the least favorably received moment of the 2013 Super Bowl ads also involved an embrace of sorts.  The lowest rated scene was that of GoDaddy’s “Perfect Match” ad, immediately following the extended make-out session between Bar Refaeli and Walter.  As with the most favorable moment, this was by far the least preferred moment of the big game’s ads.

Other notably liked scenes were the return to the nursing home in Taco Bell’s “Viva Young,” the goat kicking the door closed in Doritos’ “Goat 4 Sale,” and Red’s cowering under the piano in M&M’s “Love Ballad.” 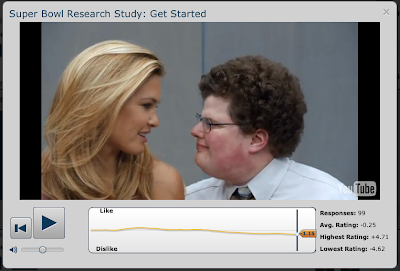 Accelerant Research conducted this study online among a demographically representative sample of 100 Americans, age 18 and older who viewed the Super Bowl.  The survey was conducted immediately following the game, and Accelerant Research enlisted the help of Precision Sample, who provided willing research panelists to participate in the study.

About Precision Sample:
Founded in 2010, Precision Sample is one of the fastest growing companies in the online market research industry. With a focus on emerging technologies, Precision Sample helps businesses connect with consumers where they live via traditional online methods as well as at social networks and via mobile devices. Precision Sample’s clients have access to one of the most representative and dynamic panels available with over 1,000,000 highly vetted, active respondents across the US, Canada, UK & Australia growing at a rate of over 300,000 new panelists monthly. 2013 will see the expansion of Precision Sample’s capabilities with new panels being established in Western Europe and Latin America as well as a dedicated Hispanics panel in the United States.